Thursday there was Queensday in the Netherlands. It’s supposed to be a day of parties, open market (everyone can sell stuff on the streets, some sort of national garage-sale) and the Queen makes visits to villages… well this year it was difference since some total lunatic tried to attack the Queen, failed but DID kill and injure a lot of people in that brutal act.

The day after, 2 friends and me had the idea to do a random travel. Victor, Erfan and me took a train to the border of the Netherlands and Germany. And the result was that we actually made it to Germany. We had some trouble finding the proper hotel so at an early hour we took the first train to Duisburg from Emmerich am Rhein. We had a great trip and thus we present you all:

It’s going to be a lot of pictures… so get some popcorn, have a drink and enjoy my pictures!

Okay, we went by train to Arnhem, then to Doetinchem and from there we took the bus to ‘s Heerenbergen (pronounced as zerenbergen).
But we didn’t know what the end-stop was so aparently we went back to Zeddam. The next bus was due in one hour so we decided to WALK to Emmerich. This picture was taken there. Look, we DO have hills!

Sun was getting lower, looked lovely.

And the path continued…

Just a random Sepia pic I thought it fitted the moment haha.

And then we actually went over the boarder and arrived in Germany!

But yes it was getting later and later.

Then we arrived in Emmerich am Rhein, and since this is in the “Ruhr area” there aparently is lot’s of industry. Yes there is.

We went to the centre of Emmerich to check out the city centre and look for a hotel.

After lot’s of hassle with hotels we went to a german pub that actually appeared to be a Polish pub and we LOVED it there!

So this was the whole travelcrew. Me, Erfan and Victor.

At 4 in the morning we where wating at the Emmerich am Rhein Bahnhoff. This was our lovely view. Well Vic and Erfan where waiting inside the station, I took a walk.

More Emmerich am Rhein Bahnhoff stuff… and more to come:

And here. This train was at quite a distance but I walked there and walked on the track to make this picture. The day after I took another picture in broad daylight with my new Canon EOS 3000 analog camara.

After a VERY turbulant journey to Duisburg, we actually arrived. Here we where standing on a bridge looking at the morning light.

In the far distance we saw this massive building. Just thinking of buying it to do photoshoots and host huge parties just makes me shiver!

We climbed over a fence and went to the large building. Especially from up close it became obvious: it needed some renovation lol.

The older harbour crane from up close. Looks like a mech warrior for some reason…

When we left I saw this pole at a gate. And yes I forgot to add the borders haha.

The large building had some old compound close so I took a picture from within. Quite some over exposure there haha.

The building itself was quite dark. I think it was built just before World War II.

Then we left. After this shot I saw my battery was extremely low so I had to save for film (since I was filming with my 5DMKII all the time)

In the afternoon we went home, so we took the train:

And arrived home safely around 18:00.

Can’t wait for my next trip. This was it for now hope you all enjoyed this update which took me 2 hours to create haha!

OR the guy was kicked from his apartment, or he is wasted or tired. Fact remains with a bag of stuff he was just sitting there for more than 5  minutes. Then I took the picture and walked off… he didn’t seem to want any help either. Poor buggar.

Lakeside Almere Buiten where I was chilling with me mate Feraaz, was really nice and peaceful.

Here I tried to make my bike to look really small. The trick is to zoom in zo there’s a LOT of DOF (Dept Of Field), when zoomed in you take 12 pictures (three rows of four) and you merge them together into one image. This is the result.  Original picture was (with smallest source files) about 80 megapixel… Yikes.

Here I tried the same with Victor. These where eight pictures merged toghether. Don’t think it worked that well but it’s still a nice picture haha.

That’s it for now, if you live in the Netherlands or any other location with nice weather like we do at the moment: Enjoy!

In addition to my previous post, here some more work! All with the 5DMKII and the Sigma 15mm Fisheye.

Almere Stad the old part of the city. This is the roof of the shopping mall.

Saturday around 5:30 pm… these are the main shopping streets… can you believe it how silent and empty it is?

The muscles of Almere Stad haha!

That’s it for now,  already go the next post kinda prepared so check back regulary!

Been a while, but I got 13 pictures ready for you! Now I present the first 6 since I don’t want the posts to be too large. I will add the rest later on in the week…

Let’s start with some abstract architecture, shall we?

Oh small side-note… ALL (except one) pictures are, apart from the border and resizing, UNEDITED!!! 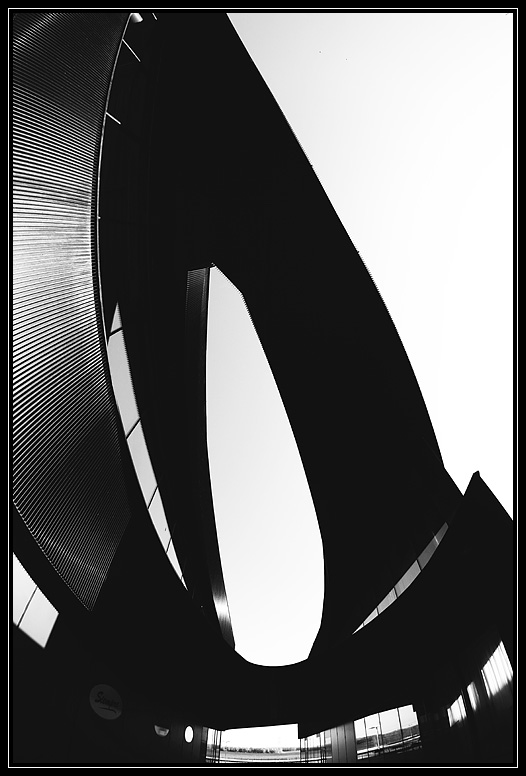 People who have been following my blog have probably seen this scenery before. However, today I took the picture quite differently. I only had my 15mm fisheye (how unpracticle, but how much fun!) with me so this is the result. 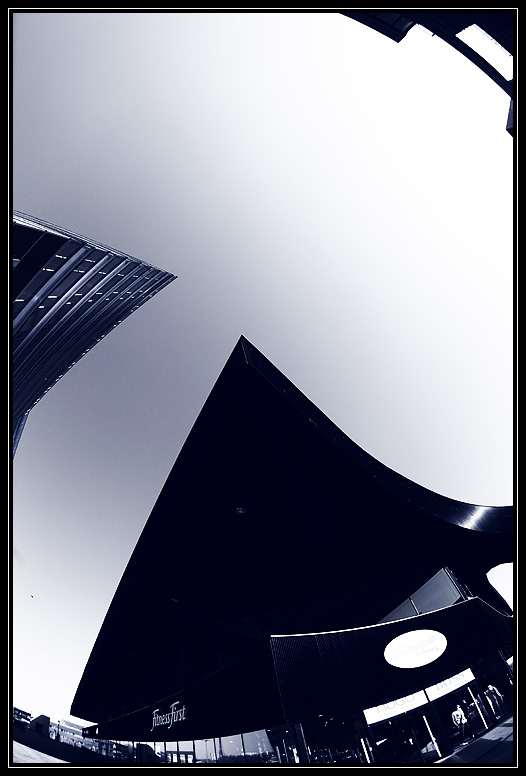 It’s quite a funky effect with the fisheye properly used and buildings that have strange shapes and corners. Love it! 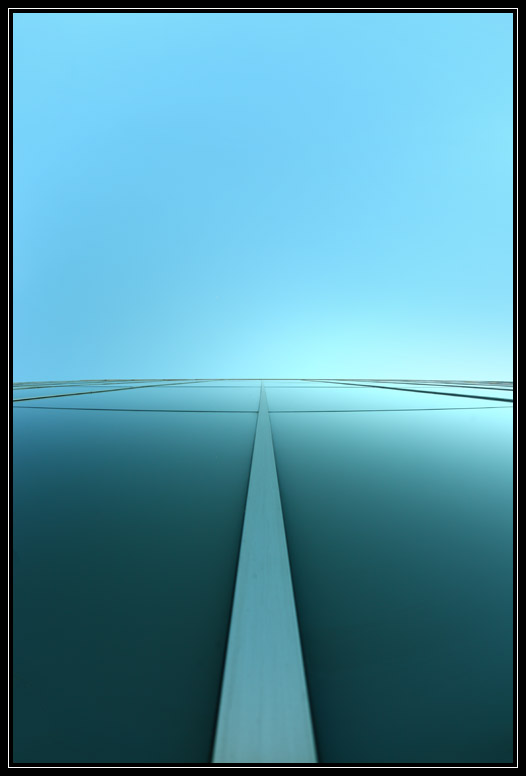 The road to the sky, a futuristic road-scene… well okay it’s just a big shiney building with lot’s of plastic and glass… but it looks nice this way hehe. 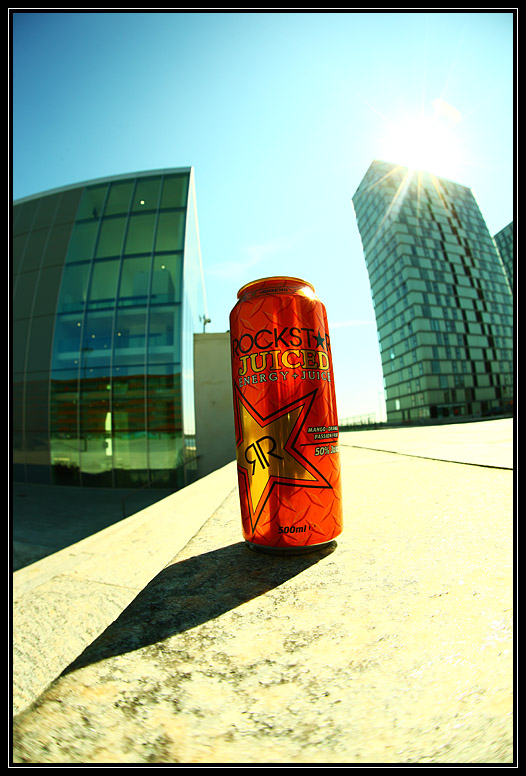 I’m not sponsored or whatso-ever… but yikes this stuff is delicious! Gave me enough energy to walk all day! 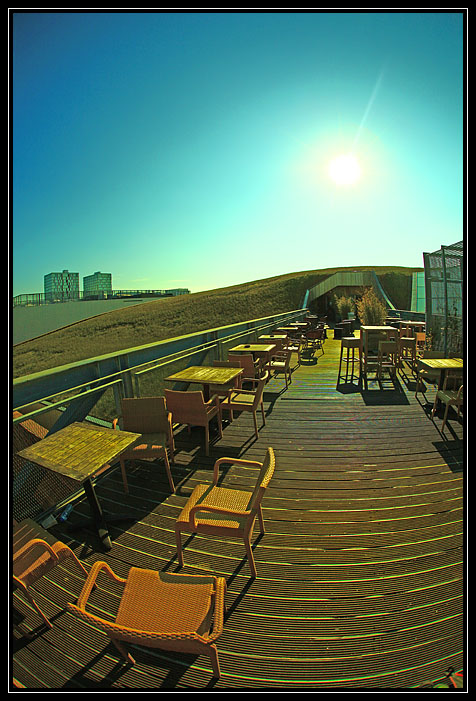 This picture IS edited (only one) since I used the famous HDR technique to show everything. 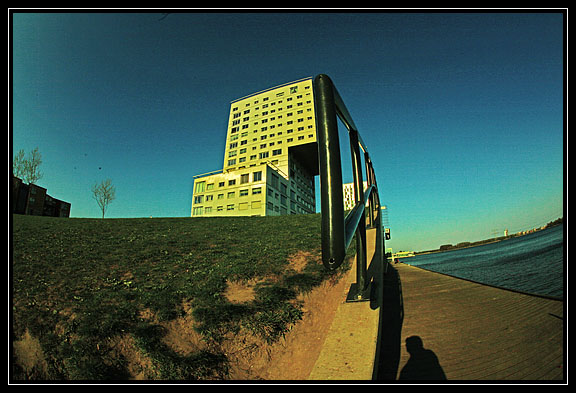 Liked the building and the fence… 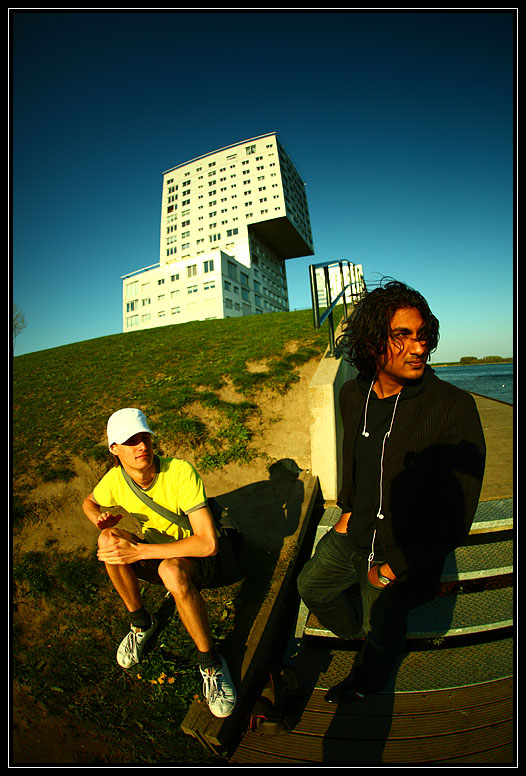 Last but certainly not least. My 2 mates who joined me today in Almere Stad. We walked through the city’s streets all day… while I captured a lot of stuff they patiently watched how I used the camera. We talked, we laughed, we discussed and we ate dinner. We had drinks, we talked to other people and chilled out at the waterside.

Jeffrey and Feraaz thanks for the great day!

That’s it for now, more to come!

And thanks for all the comments so far! Really kind!!

Tonight, Quinten called me if I came over to Almere-Stad to do some skating photography. Loyal followers of my weblog will know him from some old skating-action already. Also Jens was there and we had a great time doing some fisheye luvin’.

I really like it that you see his whole deck here. The camera was actually UNDER the deck… I risked my camera here haha! Poor EOS 5D Mark II haha!

Just like the rest also shot with the 15mm Sigma Fisheye lens… it just does justice to skateboarding-photography!

And yes friends, Jens landed this trick. Amazing, not?

Quinten looks kinda funny in air. Trust me, on the ground as well haha!

Both of you guys thanks for the great evening and thanks for doing all the tricks!