Fitbit Flex – how I keep track of my activies

The Fitbit Flex is Fitbit’s beginner-model in a range of advanced activity trackers. It’s stylish, clean, small and it is a very nice introduction to the world of activity tracking.

What does it track?

It basically keeps track of two things: your number of steps and the way you sleep. Now, this sounds very basic but it takes the data a nice step further.

It registers the number of steps, intensity and also when you made these steps. This is great because at the end of the day you can look at a graph and see exactly when you were most active. This is actually a fun part for me. While looking at the graph you can often explain all the statistics. Useful? Not sure. Fun? Yes!

For example, this was me a couple of days ago. Woke up around 7:30, got dressed, checked my e-mail around 9 and went for a walk since I needed to do some shopping. I walked  quite fast (hence the red and even green bars) but you see around 9:30 I seemed to drop pace. Why? I was in a very busy story and had to wait for a lot of people.

I walked quite some the rest of the day, had a late lunch around 1 and met a friend around 2, we talked for quite a while.

Around 8 I had to catch a train so I walked very fast for quite a while, the train station isn’t around the corner. As you can see, I got into the train because I didn’t walk for a while.

The Fitbit also measures your sleeping behavior, and I must say it’s quite an insight. It shows you from when to when you slept, when you were in a deep sleep and when you were actually awake(ish). Apparently I’m even more awake than I feared, and I really need to go to bed earlier to get my 8 hours of sleep. I was actually only getting 3 hours tops! No wonder I felt so horrible in the morning. It also showed I was seriously active during the night, so I made some changes to fix this. No coffee after 3pm, going to bed earlier, close the pc down a bit earlier, go for a quick walk an hour before bed… and I started seeing my statistics getting better. Great insight!

You have to tap the Fitbit five times before going to sleep, and do it again as you wake up. You mark your sleepytime by doing this. You might forget this once in a while, but no worries you can fix that afterwards on your online dashboard. 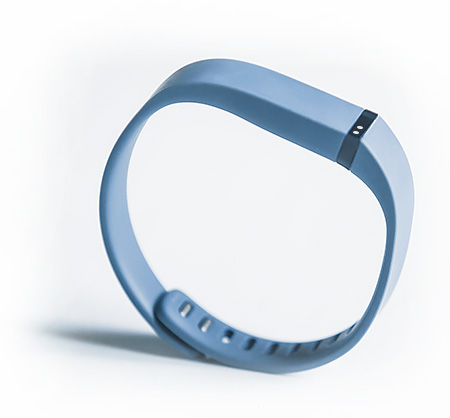 There’s also a Fitbit App. You can see all the stats you want, see the number of steps, set the silent alarmclock (it will vibrate until you wake up, perfect if you have a partner who can sleep longer than you) and much more. Works very fast and it’s included without additional charges. Nice!

You work on your body for yourself and you should always compare your achievements with your own previous ones. However, having friends who have a bout the same life-rythm as you can be fun to challenge steps wise. You can add each other, start challenges and just keep a weekly score-table to see who’s ahead in steps. I can assure you that this is a huge boost and made me walk quite some extra kilometers already.

The company Fitbit really impressed me. They put a product on the market, pioneered and while growing, they kept genuine. I had an issue with mine (at first I believe it was my own fault) and they helped me greatly. Seriously, I can’t even come up with tips how to do it even better. Good stuff!

The Fitbit is a nice tool/gadget to have. It will give sporters a lot of insight to their performance. Are you a serious sporter? Look for the other models from Fitbit, they will give you more data. For the average user, the Fitbit will be quite the stimulant to move just a bit more, and live a healthier life. Money well spent!

Shooting a tank from an electric skateboard

Gibraltar, behind Spain and in front of Morocco